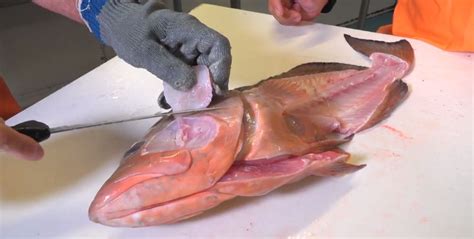 Sold as: Skinless fillets (most common), steaks, whole fish (under 10 lbs.) Buying tips: Avoid whole fish weighing over 10 pounds, since larger specimens of grouper has been associated with ciguatera poisoning.

Grouper is firm enough to stand up to almost any style of preparation, including deep-frying, grilling, braising, poaching, and steaming. On a nice sized grouper, the cheeks are big enough to make the perfect fish sandwich.

The cheek is an overworked muscle so its meat retains shape, and is rich in flavor with a lobster-like flesh. Often thought of as a delicacy around the world, grouper cheeks are one of the sweetest, most tender parts of the fish.

However, try to buy a full Grouper no larger than 10 lbs, because fish extending past that have been associated with ciguatera poisoning. Depending on the weight of the Grouper, the cheek fillets can be as small as a cherry, or as large as an orange.

The sweet, flaky fillet resembles the flavor of a halibut or bass fish and can be prepared in a number of ways including frying, poaching, steaming, boiling, or searing and will remain sweet, firm, and delicious. There are over 400 species of groupers, and they can be found year round in warmer saltwater like the Atlantic, Pacific, Gulf of Mexico and Caribbean. 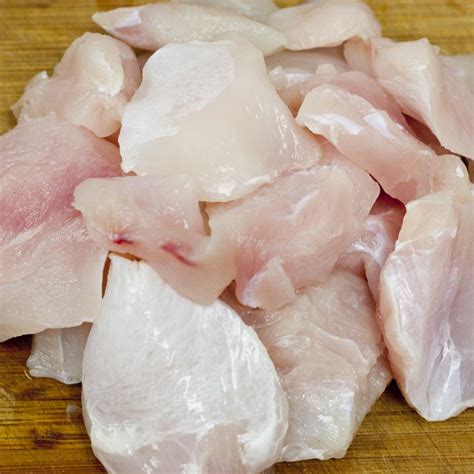 Most people end up throwing away the rest of the grouper fish after filleting it, and they forget all about the sweet meat in the cheeks. Cut around this soft spot, with your knife lining the bone and doing most of the work, and you will end up with a perfect grouper cheek fillet. 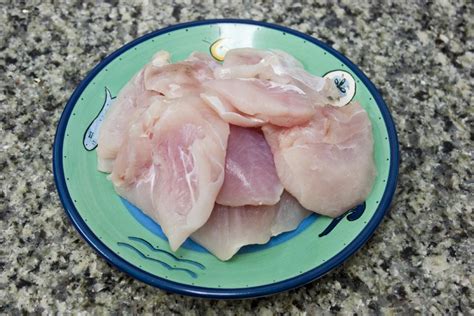 Wiki source has the text of the 1905 New International Encyclopedia article Grouper “. Here’s the story: I once fell completely in love with a wonderful local restaurant that specialized in Bahamian fare.

Sadly, this restaurant closed only a short time after it opened. A conversation at the office on Saturday had me thinking about some dishes I used to enjoy there. 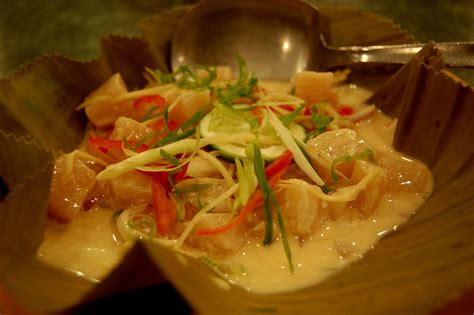 I started wondering why I had never attempted to recreate this one at home, as I have done with several other things I find myself longing for. Because this is considered a “byproduct” of processing fish, the price is great despite the excellent quality.

I cut it into four equal pieces and got ready to wrap it in bacon. I wrapped mine in two different directions and made sure that the bacon overlapped on the underside (it sticks to itself quite well) and that all the seams were hidden.

I started with one small container of raspberries and 2 tablespoons of Red Wine Vinegar. I put them in a small pan over medium heat until the berries were soft.

I smashed them against the side of the pan with a spatula until they were fairly smooth. I added a tablespoon of sugar, 1/4 cup of unsweetened natural coconut, and a teaspoon of chipotle powder.

The smokiness of the chipotle will compliment the bacon nicely and still give the sauce subtle heat. After everything was combined and allowed to simmer for a few minutes, I removed it from the heat and set it aside. 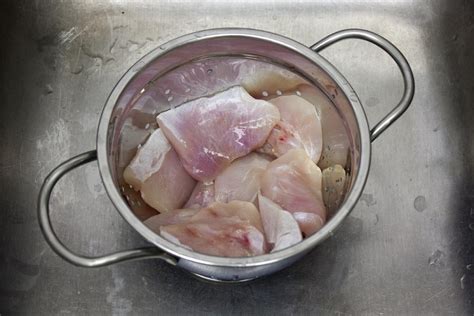 I got out the biggest skillet I have (you need LOTS of room around the pieces of fish, or they will just steam and your bacon will never get crispy). I put each piece of fish into the skillet with the bacon seams facing down.

I let them cook for about three minutes on this side and then carefully flipped them over and repeated the process. A quick touch test told me that the fish was still slightly undercooked in the center.

Sleek tuna and king mackerel are abundant in winter, while neon dolphin fish liven up the summer. Frying seals in the juices and the browned, crispy crust makes a perfect palette for a finishing sauce.

For delicate fish like snapper or dogfish, I just dredge it in flour seasoned with a pinch of salt and a lot of black pepper and quickly pan fry it in canola or olive oil. These light dusting protect the fish from direct heat but don’t overpower its delicate taste.

You can make a fuller crust by adding a dip in a beaten egg and a final roll in seasoned breadcrumbs or cracker meal (I draw the line at crushed corn flakes!). Pour canola oil into a cast iron skillet to a depth of about 2 inches and heat until very hot. 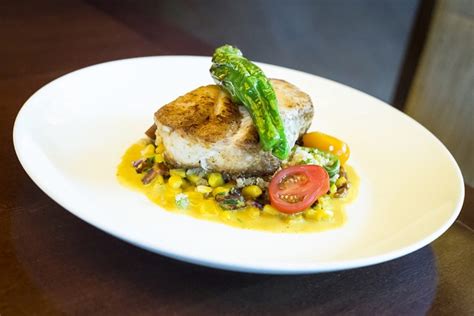 Add 1-2 cups club soda until the texture resembles pancake batter. Slowly lower them into the hot oil and fry, turning once, until golden brown, about 4 or 5 minutes.