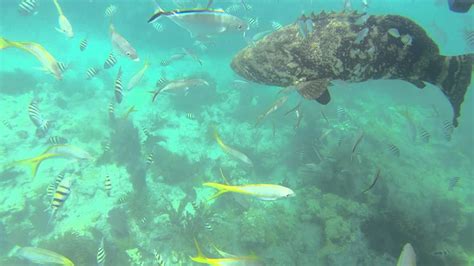 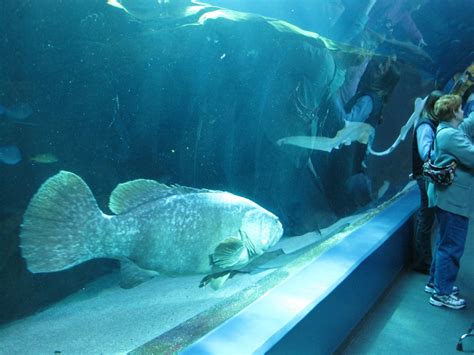 However, in terms of actual number of attacks on divers, the goliathgrouper gives sharks a run for their money. In fact, this fish has been known to steal food from aggressive sharks feeding on prey on the ocean bottom.

Although the attack may be defensive, this massive fish has numerous sharp teeth that can cause significant harm to an unwitting diver or any other organism entering its home range. It will typically reach the size of a large motorcycle (400 to 800 pounds) and can attain lengths of over 8 feet.

This monster is usually found in relatively shallow water down to 150 feet and around rock outcroppings and coral reef crevices on the continental shelf. Goliath groupers eat crustaceans, other fish, octopuses and young sea turtles.

The second author's older brother worked as a commercial deep sea diver on oil rigs in the Gulf of Mexico. A Goliath grouper aggressively chased several divers from around one oil rig until the brother finally had to go down and show the fish that humans are 'the boss' by banging on it with a huge 20-pound box wrench.

It is recognized as a critically endangered species by the International Union for Conservation of Nature (IUCN). This giant attacking fish may not be as deadly as sometimes portrayed, but they are definitely a monster of the deep which a diver must approach with caution.

Experienced divers may consider themselves fearless towards anything in the water, but when faced with a monster goliathgrouper, their diving skill and nerve may be tested. The goliathgrouper has survived millions of years by defending its own, even if this means aggressively taking on humans.