The membranes between the dorsal fin spines are incised. One has the head and body pale brown in background color but the body is almost entirely covered in small dark red-brown spots, one on each scale, these frequently form clusters shaped like the paw-prints and these form saddle like blotches along the back and elongate blotches on the flanks.

It also has black margins on the pectoral fins and a pale edged dark tail. The fourth color phase is bi colored, pale brown anteriorly, changing abruptly to dark from the soft rated part of the dorsal fin.

The scamp grouper occurs in the western Atlantic Ocean from North Carolina south along the southern Atlantic coast of the United States into the Gulf of Mexico where it has been recorded as far south as Belize, but it is absent from much of the West Indies It is also found along the Caribbean coast of South America from Colombia to Tobago. Juveniles are sometimes recorded as far north as Massachusetts and a vagrant has been caught in the Azores.

The scamp grouper is found at depths of 0 to 100 meters (0 to 328 ft), the adults are found over rock ledges and rocky bottoms with high relief usually deeper than 30 meters (98 ft). Juveniles are found in reefs in shallower water and will enter estuaries AMD mangroves.

It is a protogynous hermaphrodite forming small, short-lived spawning aggregations, which may be ten to a few hundred strong over offshore reefs with high relief along the edge of the continental shelf. These take place from February until July in the United States Atlantic waters and in the Gulf of Mexico, peaking from March to the middle of May.

Scamp are the most numerous grouper in areas of living Celina reefs at depths between 70 and 100 meters (230 to 330 ft) off the eastern coast of Florida. It has been suggested that scamp prefers areas of high topographic complexity as they are relatively small and the can use overhangs, ledges and caves to shelter from predators like sharks and greater amber jack (Serious numerals).

It feeds on fishes, benthic crustaceans and octopuses. The scamp is a popular game and commercial fish and is high prized among the grouper family.

Its meat is white, sweet in taste and has excellent food value. The name scamp is said to be because of their ability to steal bait from hooks without being caught.

There is a lack of population data for this species in a large part of its range and there is a major threat from fishing, as a result the IUCN has classified it as Data Deficient. IUCN Red List of Threatened Species. 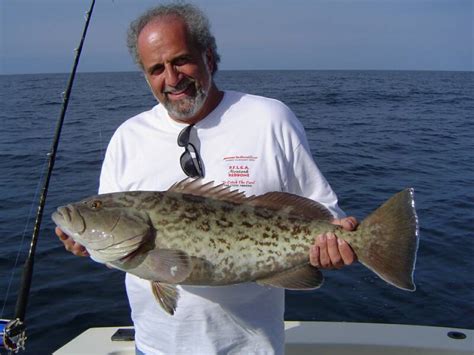 Yellow mouth Grouper are uncommon in the Gulf of Mexico, but you can bag yourself a colorful feast all along Florida’s Atlantic Coast. Season Scamp is managed under an individual fishing quota (If) program.

Gear Non-stainless steel circle hooks are required when fishing with natural baits. At least one hooking device is required and must be used to remove hooks. 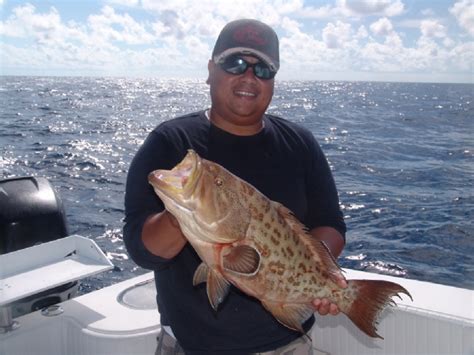 During the closure, the bag and possession limit for SG in or from the Gulf EEA seaward of the following thumb lines is zero. Scamp is a grouper that ranges from North Carolina south to northern South America, including the Gulf of Mexico and Caribbean.

Juvenile scamp has been reported, but are rare, as far north as Massachusetts. Scamp is a grayish brown color with clustered darker spots.

The tail fin is concave with the upper and lower fin rays elongated in adult fish, and appears more raggedy when compared to other grouper tails. Scamp is very similar in shape and color to yellow mouth grouper.

Spawning season occurs from January to June with peaks in March and April; however, the spawning patterns of scamp, much like other species of grouper, is complex. Gulf of Mexico and Atlantic Scamp Stock ID Process Final Report.